Sorry that I haven't posted anything in a while, been really busy.

back from my long weekend back East. I spent 4 days up at my cottage in Norway Bay, Quebec.

Flew home at 11pmPDT and arrived in Ottawa at 6:30amEDT.... so I got about 45 minutes of sleep. Partially because I was excited to go home and see the family, partially because it was a chance to get caught up on some stuff for the Sauder MBA Marketing Club as well as the new season of Mad Men.

Air Canada now has a personal entertainment system for each seat and that was nice, although I never used it until I was on my way home... I watched Iron Man (good) and What Happens In Vegas (bad).

Anyhow, I finally got up to my cottage on Friday and the weather wasn't very good. Cloudy with some sunshine but not great.

Friday night, I put the women and children to bed and destroyed the cottage - old school style - with a few partners in crime, namely Ronslo and TB.... not, TB is NOT Terry Bradshaw.

Saturday was spent sleeping and sitting around waiting for the rain to stop. Saturday night saw us have a HUGE family dinner follow up by a bash over at Ronslo's place, followed by The August Long Dance.

Now for those of you who don't know and probably can't know because you have never seen anything like a Norway Bay Dance, we're talking absolute insanity. Cover band ripping huge tunes while people go buck wild on the dancefloor. 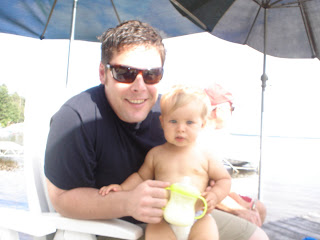 Most importantly, I got to spend some time with the newest members of my family - my niece Ella who is just over 1 years old and my band new nephew Tate, who is about a month old.

Here is a picture of Ella and I on the dock:

What is funny about Ella is that she knows more Spanish than English.... she knows how to say "Gracias" and a few other words but she can imitate a fish, elephant and lizard pretty well too.

I didn't spend as much time around tate though - he's too small to hold a beer right now.

Work has been absolutely off the hook for the last two weeks. Although it was nice to have things moving so fast, it became a bit hectic to get everything done on time. But the good news is that we're in Costco in the US... which is a huge deal.

I'm going to be in Seattle on Monday next week and then it's all going to be about trying to enjoy the end of the summer. Can't wait!

Danny
Posted by Unknown at 5:15 PM