Image via Wikipedia
The topic of Twitter followers has been a pretty hot one recently.  Not only have I spent lots of time talking about it with people at events but  some awesome posts have been written on the subject.  My buddy Jackson Wightman wrote a post recently on the topic which you can read on his blog.  Joe Thornley also wrote a great post on the subject as well, and the post and comments are worth a read.

As such, I figured it was about time that I put my hat into the ring and let my definitive thoughts be published on the matter.

I don't care about number of followers and I don't care if somebody follows me back or not.


I have heard about and seen a few dramatic flare-ups over people not following people recently and it makes me laugh because somebody doesn't need to follow you in order to see your activity.  Why?

1) You can be on somebody's list even if they don't follow you
I found this out when I tried to unfollow (and therefore not see anymore tweets) somebody I didn't want to see anymore.  You can get visibility by being on a list, and I would almost say that being on a list is more important than following because I don't see many people that use their home feed.

2) More and more, I hear more people using searches and following hashtags
Seems that Twitter2.0 is all about listening.  Power users are listening for topics and following conversations in the form of hastags more than watching home feeds or even lists at times so it comes back to the idea of participating in conversations and sharing information about topics.

Now do you agree that following isn't all that important?  It all comes back to the same thing: conversation and relevancy.   Broadcasting messages with crap that nobody cares about (meaning they don't have a search running for that topic) and you're not going to get seen.  Use hashtags and @replies and you'll also get seen.  Elementary my dear Watson.  But can you measure this?

I run some pretty quick stats and I have to tip my hat to Scott Stratten of "Unmarketing" fame for turning me onto this idea.  You see, I saw a video of Scott doing a keynote and he mentioned that when he starting using Twitter, he sat down and took about three months to interact with people on the platform.  In doing so, somewhere over 75% of what he did was talk to other people and share content.

I then went over TweetStats and TweetReach and ran some numbers.  Unfortunately, I don't have my own personal "before" numbers but here is a quick analysis and comparison. 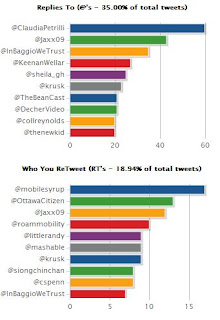 My numbers: You can see that 35% of my tweets are @replies and about 19% are retweets.  That means I am talking directly to or sharing tweets/information 54% of the time.  So, over half of my activity is conversing with or engaging people.  Personally, I think this isn't that bad but I know I can do better and I am always trying.

Scotts's numbers:  I ran the same analysis on Scott's @unmarketing account and was blown away.  Amazingly, 76.35% of his activity is @replies and 4.81% is retweets.  Rounding it out, a full 81% of his Twitter activity is conversational.  Unbelievable!  Here's the proof, showing only that 76% monster number of @replies.  When people talk about managing social media using metrics, I'd say that metric is pretty darn important.  Wouldn't you? 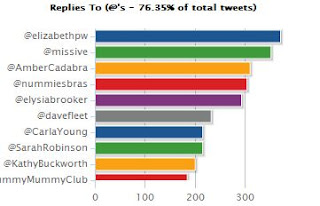 Posted by Unknown at 3:05 PM No comments:

I like to think that we are heading into a Work2.0 era where simply showing up isn't good enough.  I'm not actually sure if it's Work2.0 or Work 3.0 yet but I'm sure that it is NOT Work1.0.

This concept really hit home for me in 2010.  Largely because I started to see a shift from thinking about strategy to thinking about doing or to be more specific, a focus on doing.

Julien Smith recently launched a that urges you to get to work.

Seth Godin talks less about marketing these days and more about overcoming dips and being indispensable.  Heck, Godin even starting selling a journal that makes it easier to "ship".

In the past year, bloggers across the world have started blogging continuously in the form of lists posts.

In predicting a big 2011 for the concept of gettin' er done.  I'm sure David Allen would be pleased.
Posted by Unknown at 1:17 PM No comments: