Over time, it seemed as though it became harder and harder to catch the big ones; yet one specific type of fish, the Muskellunge or "musky", was always what we were after. Muskies are the largest members of the pike family and I have caught a few pike in my day.

However I had never caught a musky. Until last Thursday.

My brother in law and I had been talking about trying to get out musky fishing for a long time. We spoke to local fisherman who had caught muskies and figured out a few places where they were active. It should be noted that the Ottawa River is known for some of the best musky fishing in the world.

Finally, one of his close friends purchased a proper fishing boat and we were one step closer. Then, we found out about a place known for an abundance of large muskies and everything fell into place.

I went out and got licenses, a few large lures and some heavier fishing line. We loaded up the boat with some food and we were off to the races. Musky tend to feed in the morning or at night so we went out later in the afternoon for the late shift.

We launched our boat and started trolling at about 5mph. With four lines in the water, we got tangled up a few times but once that was all sorted out the real action began.

I started reeling in my line because I thought I might be tangled or have a bunch of weeds but it turned that as soon as my line came closer to the boat, something was on it. My first musky! It was about 36 inches long and about 10 pounds: 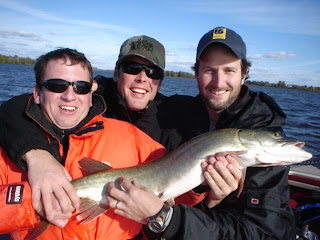 I caught a second one about an hour and half later that was about the same size but it spit the hook as we were about to put it in the net.
Posted by Unknown at 1:21 PM