This past Saturday, I ventured out to Vankleek Hill for the Octoberfest celebrations, sponsored by Beau's.

Vankleek Hill is about an hour east of Ottawa, towards Montreal. Beau's is a small brewery in Vankleek Hill that makes some of the best craft beers I have ever tasted. They make a beer called Lug Tread that is considered a lagered ale in that it combines the best of both types of beer. It is available at select LCBO stores in ceramic bottles and select pubs as well as restaurants. Look for it and give it a try sometime.

This was the first time there had been an Octoberfest celebration at the fairgrounds in Vankleek Hill and it was an interesting time to say the least.

The Good
There were lots of things to see and do. There was a traditional ompah band, hay rides, a pretty zoo for the kids, food, lots of beer and "Norm" from Cheers was there.

The Bad
I felt the event was highly over-priced. It was $15 to get in, which I think was pretty steep seeing as you can go to rural fairs and pay $10 for all the rides. Mugs were $8 and then it was $4 a beer and $1 for food tickets and various food items were pretty costly... up to like $7 for a sandwich. Kids admission was free though.

The Ugly
The service for beer was pretty laughable. It took me TWO hours to get my first beer. I had to wait 45 minutes for beer tickets then over 1.5 hours to get a beer. And the people service didn't really seem organized.

My Advice
Show up early. We got there at 3:30 and bus after bus of people were arriving. Just after I got my first beer at 5:30, the beer lines seemed to be much better. Be warned about going late.. they claimed to be sold out at about 6pm when we were leaving but the event was going until 9pm.

Here are some pictures 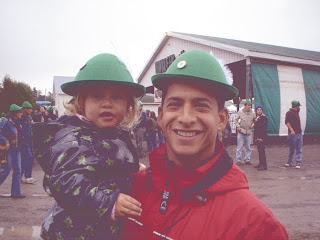 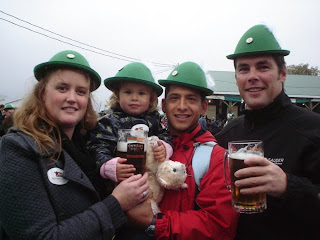 Thanks for coming to our first ever Oktoberfest. We had expected a turn-out of about 1,200, staffed and planned for 2,000 people and
asked the restaurants to prepare enough to serve 5,000 portions.

When 5,000+ people arrived, we were completely overwhelmed. The downstream impact of this was that the restaurants all sold out of everything they made, we could not sell beer tickets fast enough and generally everything got backed up.

Next year, we'll be expecting 5,000 and will be properly staffed for it. We'll also have someone counting at the gate and we will declare it a sell out as soon as we reach that number, to avoid getting overcrowded at the event.

Thanks again for coming, I hope you'll be back next year.