Why everybody needs to see stand up comedy at least once 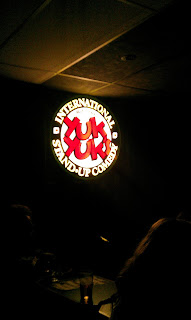 A few days ago, I finally made it out to a comedy night at Yuk Yuk's in Ottawa. I was with a few other friends to see Brian Alkerton and a bunch of other stand up comedians as part of "locals night".

I have always wanted to see a live stand up comedy show and I was really excited.  Oddly enough, I found that I learned a few things that led me to realize that everyone needs to go to see a comedy night at least once.  Here's why:

1) Everyone needs to laugh
Forget about the health benefits of laughing for a moment and realize that we often take ourselves way to seriously.  Also, it's been a fairly heavy week with the earthquake in Japan and nuclear aftermath.  It really felt good to get out and put everything else aside for a while and be swept up in the contagious laughter of a room full of people that have come together to have a good time.  Laughing makes you feel like you're alive, and during times like theses, that's something to celebrate.

2)  Getting over your fears
I can only imagine the courage it takes a comedian to get up on stage.  In many cases, they are speaking about their own lives and letting us take a peak into their inner thoughts and anxieties.  The act of exposing your inner-most self is never easy to do and I couldn't help but tell myself "If they muster the courage to do that, then you can surely summon the courage to tackle a few things that you are scared of".   Watching comedians helps you realize that in order to push yourself forward, you need to take risks.

3) Always look on the bright side
There were a number of comics that spoke very openly (and often in an extremely humorous way) about their problems and/or shortcomings.  In some cases, the source of their material was extremely heartbreaking.  What was amazing was that these comics were able to see enough humor in the situation that they seemed to be able to turn it into something positive. We could all learn from this and stop letting the bad things in our lives hold us down or hold us back.  Instead why not try to see the bright side and turn something negative into something positive.

4) Do something new
I believe that most people have a very narrow list of things to do in their spare time.  They go to dinner, go for a walk, go to a movie and then go home.  Everyone once and a while, find your local even listings and randomly pick something you wouldn't normally do and see what happens.  You might learn something new, meet some cool people or have your thoughts expanded.  Going to a comedy night certainly did this for me!

Have you ever been surprised by what you've learned from attending a random event?